We had two short sessions which I will merge into one since they occurred shortly after each other.

After meeting Augustus Rousseau (Larkin) and going for a night on the town, the players meet up for breakfast the next day. Gerolf Flügel (Elias) talked to them again and offered to bring them with him to visit professor Berthram Jost (Sánchez) at the University of Meissen. Most of the players agreed while some stayed behind since they had failed their Consume Alchohol tests during the night.

I placed the university in the finer parts of town, so the players had to travel through the city where they got to experience some of the bustle and life which makes up ordinary days in Meissen. In my version of Meissen, the university is part of the temple of Verena both of which I presented as great gothic buildings filled with ornamentation and gargoyles. They entered the university and sought out the professor by asking directions from the students and other people on in the hallways. They found professor Jost in his office on the second floor. The office is filled with old tomes and dominated by a large oak desk covered in books and documents. There is little light in the room since the tall narrow windows set with colored glass don't allow much light through.

Professor Jost welcomes them and gives them an account of what he knows about the lost elven temple. He also talks about the Kharisiri legends which he doesn't believe to be true since they all know that vampires can't walk during the day and they drink blood. After some conversations, he starts to wonder why his assistant Riza hasn't returned with the items he requested from the storage in the basement. Two of the players (Ludwig and Konrad) volunteer to go down and look for her. Here I used most of the description from the original campaign to describe the scene of her death and the items they find by her. The players both succeed their Cool tests and one of them immediately run off to get help while the other who plays a Guard stays to inspect the scene.

The player who ran for help returns with two guards and a scholar, both of the guards fail their Cool tests and flee the scene. The scholar barely succeeds so he retreats to fetch a priestess of Shallya. After having secured Riza's notes and the ward piece they hastily run to Professor Jost's office. There they tell the others of what they had found. They all rush to the storeroom, which is now filled with guards and the Shallya priestess who is examining the body. They believe that its the doings of a chaos cult, but the players off cause believe its a Kharisiri on the prowl. One of the players (Mira) charms her way to get a sample of the saliva from the wound in her capacity of an Apothecary. They give an account of the events to the guards and one of the guards mentions that a witch hunter properly will be involved in the investigation.

One of the players a Thief by the name of Victor investigates the floor outside the storeroom, he rolls 3 SL on his Outdoor survival check and finds the bloody footprints left by the offender. He follows them to Josts office where he deducts that they stop shortly before moving on.

The party returns to Professor Jost's office and finally begins to investigate the documents they found on Riza. I created this handout for them based on the testimony in the original campaign. 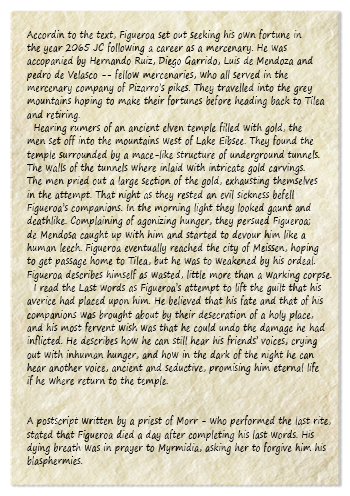 They read the last testimony of Figueroa and this instantly sparks their suspicion of de Mendosa who they want to confront. While they are debating what to do, they are interrupted by the arrival of the Witch Hunter Landrich Bachmayer who wants to question all of them. Just before Landrich arrives at the door one of the players (Otto) makes a Sleight of hand to hide the ward from whoever is arriving. Most of the players try to keep as much information from Bachmayer as possible, but the Sigmarite (Konrad) in the party reveals all they have found.

While Bachmayer talks to Jost most of the players are dismissed and return to the Emperors eagle Inn, Konrad remains to guard Jost with one of Bachmayer's guards. Victor leaves the others to go find a Wizard who can help them and Ludwig leaves to buy some items for the journey to the temple. At the Inn, they discuss what their next cause of action is going to be. After some time they are interrupted by Bachmayer who is looking for the ward. They try to hide it from him but one of the players (Frederich) misunderstands the intention and is maybe a bit frightened by the witch hunter so he accidentally reveals that they have the ward and they are forced to hand it over.

Meanwhile, during the night at Professor Jost's home, Konrad and the other Guard whose name is Hans guards the Jost family. During the night de Mendosa sneaks in through the window of the bedroom and forces Berthram to swallow the larva Mendosa is carrying. Konrad fails his Perception check and isn't aware of the attack before Berthram's wife screams when she awakens to see what is happening. The dark figure of Mendosa vanishes through the window despite Konrads efforts to follow him. Hans runs to fetch the other players and together Mira and Frederich remove the larva from Berthram.

The party rushes to the Heroes Hammer Inn where Rousseau and de Mendosa are staying. Here Otto charms the elderly lady who is managing the welcome hall and this allows Frederich to sneak past her. He finds Rousseau room unlocked and finds him drugged in his bed. Given his profession as a Physician, he examines Rousseau and finds the eldrich rune carved into his chest. He also finds the drugs on his night table and gabs it. De Mendosa's door is locked so Frederich leaves it untouched.

We finished the session with a lot of questions but also a lot of determination to stop whatever has been unleashed at the temple.