The morning after the heroes had confronted and defeated Augustus (Larkin) they awoke to a bright mountain morning. During the night Konrad had seen a large flying beast pass by the moon on his watch and it was hilarious to see how much that story had changed from shift to shift during the night. By morning they were convinced that a dragon had passed right by them, but due to its fear of fire (Not sure where that came from but interesting theory), it had not attacked the party. Dieter had been disturbed by sounds from the burial pile they had used to burn Augustus and had awoken everyone up to prepare for battle. But it turned out to be wild dogs trying to get at the remains in the pile. Dieter was not very popular after that episode even though Otto could see the merit in being awake in case of trouble.

They started the morning by debating if they should turn back now that Augustus was dead. He had seemed to be involved with the whole scheme and they deducted much of the plot and reasoning for bringing them. Ludvig wanted to head home and leave the pyramid but Otto, Frederic, and Dieter wanted to continue. When Konrad mentioned that once they came back to a major city they could and over the case to the witch hunters Ludvig changed his mind and decided that it was properly wiser to head-on, not wanting to get involved with the order of the cleansing flame and fearing what Konrad might reveal in such an encounter.

The party continued their journey and after an uneventful day, they searched for a good place to set up camp. They where now only half a days walk away from Ansbruhk. Frederic once again proved his talents as a scout and found an ideal location in a small rock alcove which protected them from the weather and gave them some shelter. They set a watch and Konrad volunteered to take the first shift. Unfortunately, he rolled a 99 on his perception test which resulted in him falling asleep. After a good nights rest the party awoke to find that some of their supplies had been scavenged during the night and Konrad still asleep at his post.

After some scolding and ridicule, the heroes continued onward to Ansbruhk and reached the hamlet shortly after lunch. The locals bid them welcome and were very interested in why they were traveling this way. The party revealed that they were headed for the elven temple in the mountains and some of the locals warned them to stay away from that cursed place while others muttered that they were mad. But in the end, the locals invited them to stay the night. I gave the player a drawing of the hamlet and the area around it as seem below. 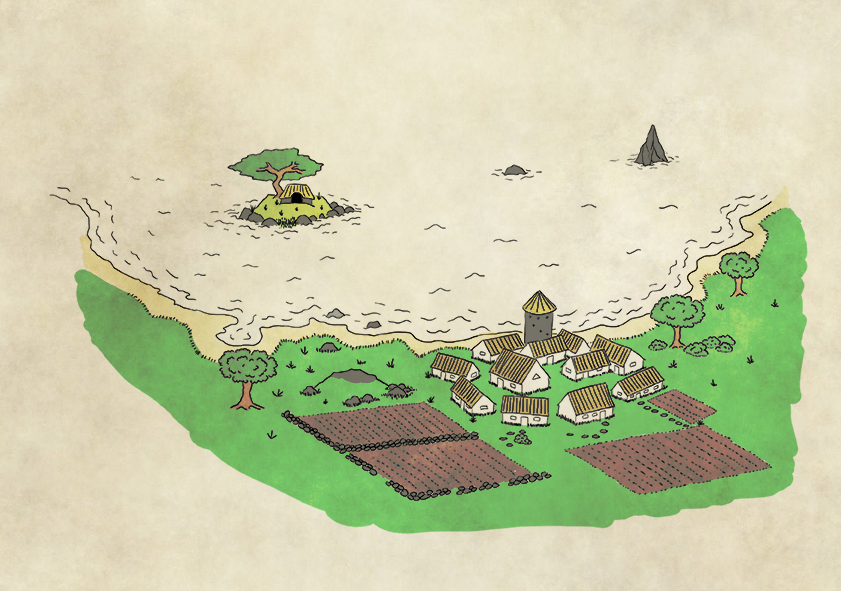 The party borrowed some boats and rowed out to talk with Naira who lived on the island not far from shore. I depicted Naira as an old hag or possibly a witch who had foreseen the coming of the heroes. She revealed the path to the temple now that they no longer had Augustus to lead them and had a chat with Mira about her abilities and how she could develop her skills. I am trying to tie parts of the story into the player's career paths and here was an opportunity to offer a different path to the player who is playing Mira, who is fairly new to RPG's. During their time in the hamlet, Konrad had begun to dought how much the other heroes wanted his help and if he should see their quest through. He sought out the local shrine to Sigmar and prayed for guidance, again here it was interesting to insert a bit of mystery so I presented the player with some signs, which he interpreted in a very interesting way. The party stayed overnight in the hamlet and continued onward the next day.

They followed the signs Naira had instructed them to and after two days of travel along the lake they headed up into the mountains. On the second day, they came across a small valley where they spotted two people on the opposite side of the valley headed in the same direction as them. His was the encounter with two Kharisiri from the prolog, and then party tried to cut them off. But half the party failed their Endurance rolls to catch up with the Kharisiri so instead, they just followed them to the stairway leading to the temple. Here they lost track of the two people and decided not to head upward since the night was fast approaching. They set a double shift that night but there were no unpleasant encounters.

The next day they reached the temple after a few hours of climbing the stairway and started to explore the ruins. Konrad investigated the pit with corpses and quickly dissuaded the other from going there. They also quickly deducted that the open shaft was a way down into the tunnels but wanted to explore the pyramid first. Otto scaled up the walls of the pyramid and discovered the crack at the top. He tried to peer into it and for a brief second got a glimpse of the horrors inside. He initially failed his corruption check and would have gained a corruption point but he used a fate point to reroll and luckily succeeded.

After this, Otto fleed down the sides of the pyramid and was very shocked at what he had seen, now more convinced that they had to finish their task more than ever.

The party entered the tunnels through the open shaft and soon found themselves in the shallow labyrinth below the ground, they first headed toward the pit and discovered the exit there, then they found the room with the resting Kharisiri, but they didn't want to risk a fight so they left them there and headed towards the pyramid. There they discovered the golden band keeping the horrors inside at bay. They were heading to the left but Dieter saw a body down the right path and they decided to investigate. As he poked the old body lying in the corridor in an old set of armor the maggot within animated the corpse and it began to rise.

This was where we ended a great session with a lot of exciting developments. The players are really getting into their characters and a bit of party intrigue has already developed which is going to be interesting when we jump to the main campaign.