We played our fifth session where the players managed to leave Meissen and begin their journey to the lost sanctuary of Qualthias.

The morning after they had required the golden rune from the temple of Sigmar they awoke anxious to get moving since they didn't know when the theft would be discovered. Many of the characters still had hangovers from the visit to the tavern last night, especially Victor and Konrad who both failed their Consume Alchohol tests badly. After a few discussions of how to proceed, they headed to the docks to meet up with Augustus Rousseau curious to see if they would find de Mendosa there. They found on Augustus at the boat and he claimed that they could not wait for de Mendosa despite his role as a body guard. Augustus was eager to get going on the journey towards the ruins and if de Mendosa didn't want to earn any money then that was his loss. None of the players rolled well on their Intuition tests so they were unsure of Augustus's motivation for moving ahead without de Mendosa. 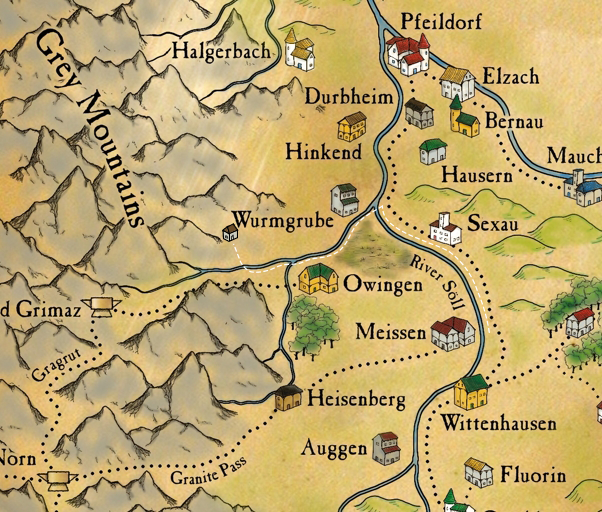 The route to Ansbruhk would take them downstream to Wurmgrube and from there upstream past Owingen to a small landing south of Ansbruhk. From the landing, they would travel for a day or two up into the mountains to reach Ansbruhk. The travel to Wurmgrube was rather eventless since its a well-traveled route towards Nuln and Altdorf, but when they started heading upstream towards the landing they got word of possible attacks along the river and they were warned to keep on their tows if they were heading past Oringen.

As they traveled past Owingen and headed towards the landing, the characters started to notice a group of small people or creatures following them o a bit further inland. They decided to force a confrontation if such was to be had and placed their boat in a convenient location where they had some cover from large boulders. As the sun set a group of 10 goblins assaulted the camp they thought was turning in to sleep. the heroes responded quickly and most were not surprised by the attack, only Mira and Victor missed their surprise test. A body battle broke out but the heroes quickly got the upper hand and began cutting down the goblins. As the tables turned some of the goblins began to flee into the darkness and the rest were quickly dispatched. After the battle, it was apparent that despite a large amount of blood everywhere only Otto and Mira had been seriously wounded in the battle.

We stopped right after the battle since it was late. This was our first real fight and we talked a lot about how to handle the opposed rolls in a fluid way and how to manage advantage. It was obvious that we needed a system to manage it when there were many combatants in the same fight and also we needed to look into combat actions. But all in all, it was a good experience.

Next session will take them to Ansbruhk and hopefully, we will reach the ruins. I have placed a few surprises in Ansbruhk and made a few changes to the original scenario.

@Thanks to Mad Alfred for the source material on Wissenland