Initially, I sent a teaser to the player to get them excited about the campaign and get us started, similar to the news article clip in the original campaign. I created this handout based on the original newspaper article, but converted to the Old world.

In my campaign, the players are invited to Meissen by Augustus Rousseau (Augustus Larkin) to help him mount an expedition into the Grey Mountains in search of an elven ruin known as Qualthias. I gave them this handout to replace the telegram from the original. I explained that they had each been contacted by Rousseau or one of his agents, who had recruited them for the expedition. They had each received this letter from Rousseau after they had signed on with the expedition. 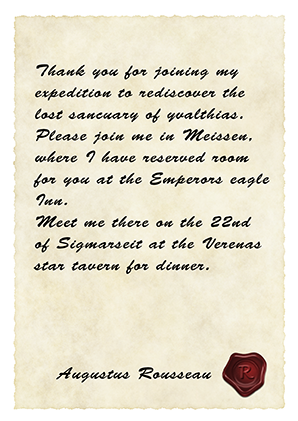 The players have been given lodgings at the Emperors Eagle Inn which is one of the finer establishments in Meissen. The stay includes healthy breakfast and warm baths, which is high above what the characters are used to. Rousseau (Larkin) is assisted by the Tilean Soldier Lois de Mendosa and Gerolf Flügel (Jackson Elias) who the players meet the first night in Meissen when they dine with Rousseau at the tavern Verenas Star. The characters for this campaign are:

As the characters dine with Rousseau, de Mendosa and Flügel, they are told about the upcoming expedition and what they hope to achieve. In my game, Rousseau did not hide the fact that he wants to find artifacts which he can sell to potential buyers in Altdorf. I used most of the details of the trip as described in the original campaign except I changed the method of travel to a riverboat. The destination of the first part of the expedition is a small hamlet by the name of Ansbruhk near the lake of Eibsee. From this hamlet, they will travel into the Grey Mountains in search of the elven ruin and the riches it holds. The Characters have the option of asking questions to Rousseau and they are mostly concern with how they will defend themselves and what supplies will be required. Rousseau provides them with a budget for buying some weapons and supplies and says that he is willing to discuss the purchase of oddities should the characters find that they are needed.

Once the dinner has concluded Rousseau and de Mendosa leaves the characters, who then get to talk to Flügel. He tells them of the local history and folklore professor who has been rejected by Rousseau, but who wants to join the expedition. Flügel plans on visiting him at the university in Meissen the next day to talk to him about the history of the ruin and the local legends. He also hopes to discover why Rousseau doesn't want the professor to join. Flügel later that evening also tells the characters that he suspects that de Mendosa is part of a cult with nefarious intentions, but he doesn't have any solid proof yet. One of the characters suggests bringing in the witch hunters, which the other characters and Flügel quickly reject since they don't want to burn an innocent man should the accusation be false.

Some of the characters agree to join Flügel the next day while others plan to do some shopping for the trip. This is where we will pick up the next time.

I will try to describe all the conversion I have made as well as the material I have used.