We started the fourth session of our campaign on the 15th of Rachexen at the gates to the Garden of Moor in the Oberhausen Bezirk where the funeral of Reinhard was to take place. Inside the priest of Moor was waiting with two acolytes. There were also four other people attending the funeral, Diethard Kroll (Jonah Kensington) who was the publisher of Reingards books, Wichman Leichlin (Carlton Ramsey) and his assistant Willa Sligh (Willa Sligh) who was Reinhards layer and the fourth was the woman who Dieter and Ludvig had spotted outside the house of Kautsky. After the short ceremony was over and the priests had carried Reingards body out into the garden behind the temple, the players were approached by Diethard, Wichman, and Willa. They talked shortly about the tragedy and both Diethard and Wichman invited the party to visit them at their offices in the coming days, as they had important matters to discuss with the friends of Reinhard. After they had left the players were approached by the unknown woman who introduced herself as Linde Hauck (Rebecca Shosenburg) and explained that she had been talking to Reinhard previously and that she was very keen on getting to talk with the group about a matter that it seems they were all involved in. She invited the group to visit her at her work, at the Altdorf Press which lies in the Friedwang Bezirk.

The players decided to split up for their investigations. Some would visit Diethard and the others would visit Linde to hear what they both had to say. Wichman had invited them to visit his office on the 17th for the reading of Reinhard's will. At Diethard's office in the Prospero publishing house Otto, Mira, and Frederich were invited in for a drink. They discussed the misfortune of Reinhard and remembered some of the good times in the past. Then Diethard told them that he had been corresponding with Reinhard in recent months and he was afraid that Reinhard was beginning to lose his sanity. He had received letters that indicated that the Scharf expedition was in fact not lost but very much alive, but the last letter was almost intangible as Reinhard's writing had become erratic and fractured. I gave the players the two handouts below. 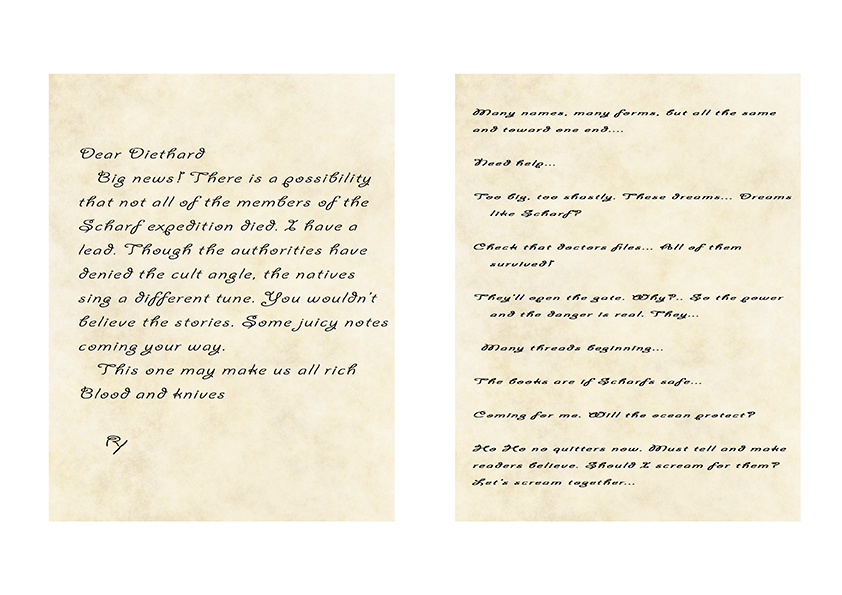 Diethard then confirmed much of what the players had discovered in regard to the Scharf expedition and they discussed some of the possible reasons the Scharf estate would have for not wanting Wolfhart Scharf to return and if they could be involved. They decided to figure out how to set up a visit with the estate and possibly track down the woman who had accompanied Erica Scharf on the expedition to the Border Princes, to see what she knew of the subject. Meanwhile, the others visited the Altdorf Press where they found a large group of people hard at work. Konrad quickly spotted Linde who was working at a desk near the back on the large newsroom. They crossed the room to her desk and work stopped as they passed, it was not often that a warrior priest of Sigmar visited the establishment and certainly not in a friendly manner. Linde was happy to see them and explained that she had been watching the house of Kautsky because she was trying to save a man from the gallows. He had the one who had been accused of murdering the victims of the cult and she believed him to be innocent. If the players were willing she would introduce them to the wife of the man and get her to explain the situation. Linde believed Hartmut Fellerer (Hilton Adams) had been framed for the crimes because he had started a neighborhood watch to keep his neighborhood safe from the murders which seemed to be plaguing the Reikerbarn Bezirk. Linde could explain that a lot more murders than the 9 known murders where actually being committed. The players agreed to try to help Hartmut in exchange for Linde's help in trying to find out what is happening in the house of Kautsky.

The next day the group first visited Ottokar Hilscher to report on their findings. They told hos of all the indications they had found of their suspicion that the city guard in the Reikerbarn Bezirk was either in league with the cultists or on their payroll. He was impressed by their progress but as long as they had no hard evidence that the police of the Reikerbarn Bezirk was in league with the cultists he could not do anything within the Bezirk. He encouraged them to find evidence of the payoff or similar dealings and maybe to visit Hartmut in the local prison where he has locked up.

As they left Ottokar, they split into 3 groups and ventured into the Reikerbarn Bezirk to try and find evidence. While they didn't get much solid evidence, Ludvig and Dieter where stopped by a group of 6 local city guards who kindly told them to stay away from the Bezirk and then escorted them out of the Reikerbarn Bezirk. Otto and Frederich kept a watch on the local city watch headquarters while Konrad and Mira tried to confirm the rumors of the murders they had heard from Linde. Konrad and Mira quickly learned that no one would talk to them, they all seemed afraid to speak.

Dieter and Ludvig have managed to attract the attention of the cult of the purple tongue. They are now tracking them and will try to remove them as soon as they get a chance. It will be interesting to see, what will happen and if they will survive the coming encounters. So far they have been able to avoid giving the cult information about the rest of the party but this properly won't last long. I plan to spring an attack on them every second day either when they are alone or when they are in a small group.

The party has been spending a lot of time talking the npc's from the campaign and haven't diverted much from the plot until now. I am trying to introduce more outside elements to make sure it doesn't feel like a railroad. I will run a plot with Dieter's brother who I also plan on being a member of the cult, but there is also a part of Dieter's backstory which opens up for a confrontation between him and his brother. Another example is Mira and Otto's mother who wants her kids to be married, so I plan on having them be introduced to locals who their mother sees as potential good matches. At the same time, both Mira and Wilhelm now have minor magic available so we can do some rp'ing with them learning their skills.

The Link between Hartmut aka. Hilton Adams, the local city and the cult has been a bit tricky to pull together. Logically Hartmut would have been executed very quickly in the world of Warhammer as I see it, so I had to make a plausible reason why he had not been executed yet especially given the link to a local lieutenant in the city guard and the cult, they would have tried to make sure he was killed quickly. I gathered that Linde and some of the people who support her have managed to prevent the local Magister from signing the final order of execution by bribing him. By now their funds have run dry and soon the next payment is due, so they are in a hurry to secure evidence of his innocence.