We started our first session of the campaign by catching up on what the players had been doing over the last 3 - 4 years and how they had been communicating with Reinhard as he traveled the world and wrote books about various mystical subjects. We talked about their individual developments and how they all happen to be in Altdorf which would be our starting point for the campaign. As the gaming session started I handed them the following letter from Reinhard, which they had all received a few days before we started. 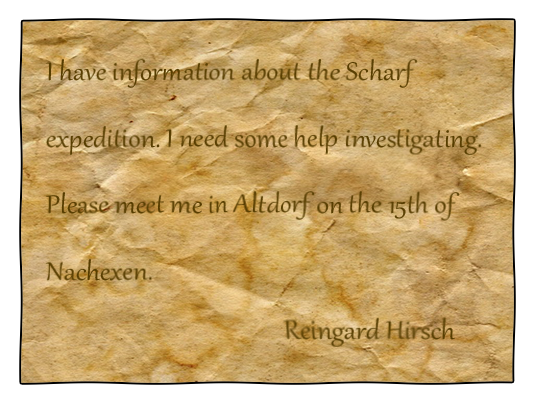 None of the players remembered the Scharf expedition but they spent some time doing some investigation on it. They found the official news when had been cried by the city criers and posted in the news. They also managed to dig up some old rumors about the expedition but they didn't find much. Based on their rolls I handed out the following news:

News: Scharf departs Araby - Edler Wiland Lanric sent word that the expedition is headed to the borderlands for some “Well earned rest”.

News: Important visitors - One of the border princes has been entertaining the Scharf expedition at his court for the last couple of days. The prince held a great welcoming dinner where the wit of Edler Wiland Lanric, expedition co-leader, was much in evidence. The expedition is heading towards the old world mountains for some hunting.

The players prepared for the meeting and gathered at Hotel Aichtaler Hof room 410 in the Reikmarkt (South market) district in Altdorf. They entered the hotel and announced that they were meeting with the guest in room 410 and the valet guided them to the 4th floor. They ascended the stair and found the door to room 410. Ludvig proceeded to knock the door and as he did Dieter and Konrad noticed that movement inside stopped. When noting happened Konrad decided to kick in the door with his new Warhammer in hand. As the door swung open he was presented with the gruesome sight inside. Reinhard dead on the floor obvious tortured by the three assassins. One of the assailants was halfway out the window and two others, ready to attack, on each side of the door.

A big fight ensued, in which Mira mutilated on of the attackers by only hitting him in the face and Konrad bashed another so hard that he fell to his death from the 4th floor. Ludvig started the fight by running for help down the stairs, but before he could return the assassins were all dead. We finished the session after the fight, ready to pick up with the investigations next time.

I decided to place the first city in Altdorf to give the players a good starting point for their initial investigation into the Scharf expedition and the many other mystical aspects which will surface during the beginning of the campaign. I think it an excellent location for the campaign were the players have many options when they want to investigate. I also made sure to give the individual players connections they may utilize in their investigations and which can help them gain access to NPC's like Erica Scharf (Erica Carlyle).

The Von Scharf (Carlyle) family owns an estate outside Altdorf which I expect we will explore when they begin to make the connections between what Reinhard was working on. I have made the Scharf family a new nobility family, having come to their fortune through trade which Erica is now maintaining after her brother almost destroyed their wealth. This in my mind makes them more accessible to the players than an old noble family who would have felt the players are beneath their social level, where the new nobility is also interested in increasing their wealth to maintain their positions.

Victor was accepted into the grey order which gives him a large network to pull when they need information and give me a means of giving the players hints should they need it.