Our fifth session started on the evening of the 18th of Rachexen with the heroes trying to decide where to sleep. As night fell they discussed how to avoid getting attacked during the night, Ludvig and Dieter had become very paranoid after their encounter with the city guard in the Reikerbahn Bezirk. They decided to break up at sleep in their homes. The next morning as Dieter woke up and left his barge he noticed a small mark on the side of the boat, shaped sort of like a tear with a wave in the top and a small circle in the middle. He removed the sign and moved his barge to a different location before finding the others and report his findings.

The group sought the office of Wichman Leichlin (Carlton Ramsey) in the Bankbezirk in northern Altdorf. As they moved through the busy streets of Altdorf they split into two different groups. One with Ludvig and Dieter, and the others in a separate group following them. The second group started to notice five individuals who were clearly trailing Ludvig and Dieter, but before they could find a suitable spot to confront them they reached Bankbezirk and the stalkers broke off and disappeared. This was not revealed to Ludvig and Dieter who hadn't noticed their tail until much later.

They reached the office of Wichman Leichlin and knocked on the door while keeping their eyes peeled for nosy spectators. Willa, Leichlin's assistant, opened the door and invited them inside. She asked them to wait in Leichlin's office while she fetched him. Leichlin was happy to see the group even if it was under these unfortunate circumstances and offered them something to drink from his personal stash. After they had all settled in he explained that Reingard had visited him just days before to make sure his affairs were in order and he gave Leichlin a letter for the group in case he passed away prematurely. Leichlin handed the letter to the group and once they had read it he opened the will and started to read it. 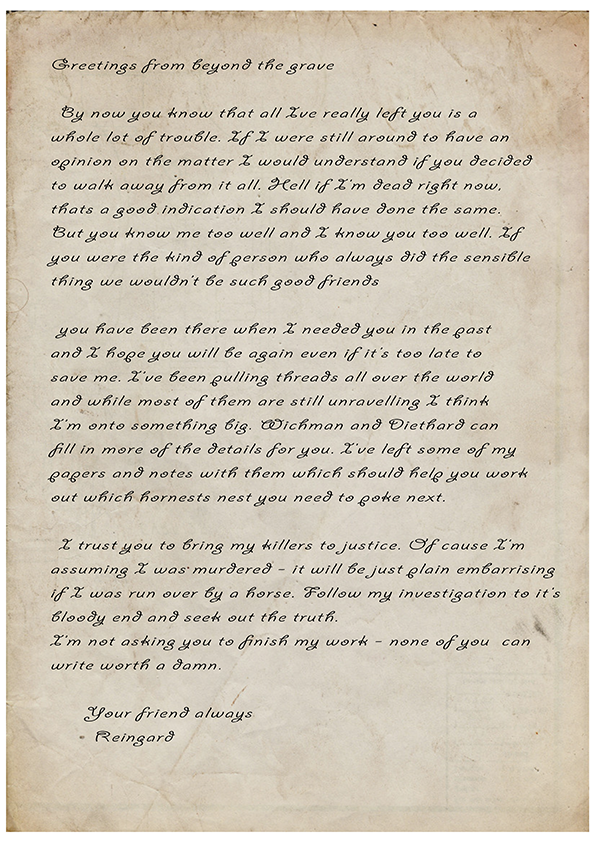 The will asked the players to finish the investigations Reingard had been conducting and if they where willing to see it through Leichlin would administrate Reingard's personal remains to make sure they covered the group's expenses during the investigations. The entire group agreed to continue the investigation and Leichman offered them to host their meetings should they need a place to discuss sensitive matters.

They left Leichman's office to visit Linde Hauck (Rebecca Shosenburg) at the Altdorf press, to talk with her about Frau Fellerer. She had managed to set up a meeting with her the next evening at an old theater in Reikerbahn Bezirk. After they had talked to Linde they headed to the south side of Altdorf and the prison where Hartmut Fellerer (Hilton Adams) is being held until his execution. At the prison they presented a letter which Wichman had given them, authorizing them to speak with Hartmut, and they were brought before Harald Fried (George Brunton) who is the warden of the prison. He would allow them to speak with Hartmut for half an hour and no more. He personally brought them to the cell where Hartmut was locked up.

Hartmut told them that he had not carried his service knife on him while he was patrolling the streets and that the city guard must have picked it up in his home when they had arrested him. The group who had formed the neighborhood watch where all from his old soldier squad but they had all been threatened into silence. He also told them that there were plenty of other murders being committed in a manner similar to the 9 that the city guard had investigated but they were kept secret. People also disappeared around the new moon and were not heard from again. It was always two people who went missing. None of the murders were committed in the vicinity of the house of Kautsky, there seemed to be a two-block radius around the place where the murderers didn't commit their crimes. He could not tell the group if the city guards were part of a cult or just bribed to look the other way. At this point, Harald broke in and said that the time was up. As he lead the heroes to the gate, he said that he would try to postpone the execution as long as possible as he didn't believe that Hartmut was guilty, but it the order of execution came, he would do his job by the end of the day.

The heroes left the prison to make plans for how they could get the evidence they needed to give the Magister a reason to let Hartmut go and a safe means of not losing face when they proved that Hartmut was innocent. And could they get Lt. Lubin Erlach to give up on his connection to the house of Kautsky.